K Thomas Lawson is proud to be a division of Bartlett Tree Experts, and our staff now has the backing of an international tree-care company and tree research laboratory to help continue providing excellent tree service and shrub care in the Charlottesville, Virginia area. View a complete list of professional tree services offered by Bartlett.

You see a rust or bronze colored dead pine tree on your property. The abundance of the needles indicates that it may have died quickly under the voracious teeth of beetles and borers. You may want to act quickly and remove the dead pine tree entirely from your environs to stem the migration from your tree to the next live pine tree.

The Flat Headed borer, Buprestis lineate, (Family Buprestidae) is common in the pines in the east and south, including log houses! In early summer through fall, young larvae are active in the pine bark, mining the juicy inner bark which is carrying nutrients down to the roots. They grow rather large—we’ve seen them as large as a pinky finger (3-3.25 inches)

When mature, they have transformed into metallic colored beetles, usually boat shaped and flat and varying in size. The mature beetles exit the bark through an oval hole and seek a new location on the tree or another tree. It is the larval stage that can kill the tree by destroying the nutrient-piping infrastructure situated just under the bark. 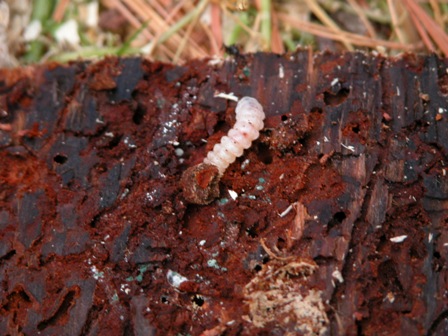 A Round head borer, (family Cerambycidae) is often referred to as long-horned beetles, the adult showing antennae that are longer than the body. The fleshy larval stage looks very similar to the flat headed borer and can be the same size (pinky size; 3-3.25 inches) The larvae are opportunistic on already weakened pine trees, feeding on inner bark.

Again, like the flat headed borer, the larva can kill the tree by eating the nutrient-piping infrastructure that is situated just under the bark. The adults also leave through an oval exit hole and feed on pine tree pollen. I hope to have a picture for you soon.

Southern Pine Beetle--look for a black shiny 2-segmented shape, rather small, on the left.

Southern Pine Beetle (see pic above) Adults are brownish black, small, (1/4 inches), and all life stages overwinter in the bark of the tree in. Adult females land on host trees in the early spring, bore into the pine tree and attract other beetles by secreting pheromones. As infestation grows, nearby pine trees will likely be attacked as well.

What is the solution for dead pine tree and beetles or borers?

These insects usually enter the tree at eye level and above. You may see the tiny holes. You may see tiny dribbles of sap, or little dried mounds of sap, especially on a white pine. Other pines don’t have as much sap available. If you can spot these beetles, ask quickly.

REMOVE the tree. Spraying and other methods of deterrent won’t work at this point. Nearby Pine trees on your property and your neighbors WILL VERY LIKELY become infested if the tree and all of it's bark is left on your property.Getting rid of the tree as soon as you identify that it is infested is highly recommended.

Return to Homepage at Arborist-Treecare.com

Check your local extension offices. They will have a wealth of information about the borers and beetles in your area. In Virginia, start with Virginia Cooperative Extension